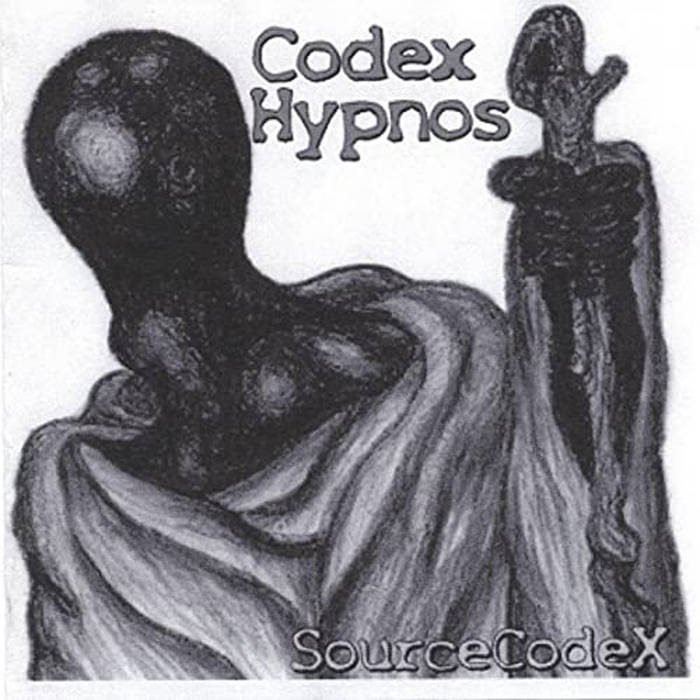 Though a guitarist (since 1967) I have always had a
strong fetish for synth musicks. I have been kicking
around since the very first synth musicks appeared
on the scene and have loved every blip and bleep. The
New Age era fostered the arrival of drones and
atmospheric and ethereal space music -- some being
void of rhythms. This form of amorphous synth musick
naturally pulled me in as it had profound effects
on my inner worlds and shifted my psyche. I recognized
a "power" in this genre to evoke altered consciousness.

In 2002 I began experimenting with various software-based
synths and sound editing programs. As a music reviewer,
I have the pleasure of hearing musicks many will never
have the chance to enjoy. In this deep sea of blissful
inspiration I was destined to "give back" my own twisted
echoes of the genre. CodeX Hypnos is the results of
decades of listening and a few months of learning the
right software.

No external hardware was used! This music's origin is 99%
from the silicon cities of a very basic, outdated, personal
computer. I was inspired to go full throttle with finishing
this "soft-synths" project after brief e-discussions with
synth composer James Johnson and recording software
authority Scott Garrigus.

Most of CodeX Hypnos was created and finalized
between November 2003 and January 2004. Only two
pieces were first envisioned and created in their
"virgin" states back in 2002 and then lost their
"innocence" in late 2003.

I wrote these eight pieces in isolation from, being
unrelated to any theme and then upon listening to them
-- a theme was clearly evoked. Tracks 1 through 8 are
arranged now as a "journey" by an introspective voyager
into unknown outer and inner realms of consciousness.
This "psyche-naut" encounters regions of placid
lightscapes, formless voids, ominous darker and
threatening regions, and then a final wasteland where
the death of Time and a time of Death is experienced.

Tense, beatless soundscapes ... unrelenting in their grimness
Reviewer: ~ John Shanahan of Hypnagogue: Ambient Music News and Reviews
". . . the results, as gathered on this freshman effort, make for a workable piece of dark listening . . . carries the listener through tense, beatless soundscapes that are unrelenting in their grimness. The drones are soothing in a disturbing kind of way . . . layered his sounds very well. There's a lot going on below the surface . . . I rather expect to hear more and better from SourceCodeX.

Evokes and provokes on several emotional and spiritual planes
Reviewer: ~ Jim Brenholts
It is a journey – in eight movements – through the inner and outer psychescapes of consciousness, unconsciousness and conscience. John created these deep drones and warm atmospheres entirely with software synths and music editing programs. John’s love for this style of music shimmers as he delivers a refined package with raw power. His minimalist approach defines the drones. The drones define the atmospheres.The atmospheres define the psychescapes. The psychescapes define his minimalist approach. Throughout the entire adventure, the music evokes and provokes on several emotional and spiritual planes. This is a great CD from a true musician’s friend!

Like the barren lifeless beauty of the winter season
Reviewer: ~ Candi Brammer
While a lot of music with darker themes often seems pretentious and overdone Codex Hypnos doesn’t forcefully try to sound creepy or morbid. No blood, gore, or anything of that sort is conveyed with this album. Rather what we have is a work of contemplative exploration of death, dying and natural decay which is transmitted by deep, elongated drones and timbres that create a seemingly gravitational downward pull or suction like a massive vacuum. The music is solid yet abstract and colorless evoking grainy, gray-filled images. I would liken the experience of listening to Codex Hypnos to viewing the chaos and destruction of a tornado but safely from afar. There is a certain quality of beauty contained within these frightful passages like the barren lifeless beauty of the winter season.

It blows my mind
Reviewer: ~ Jerry Kranitz of Aural-Innovations.com
" . . . it blows my mind to hear something that sounds as beautiful as the music on Codex Hypnos . . ."