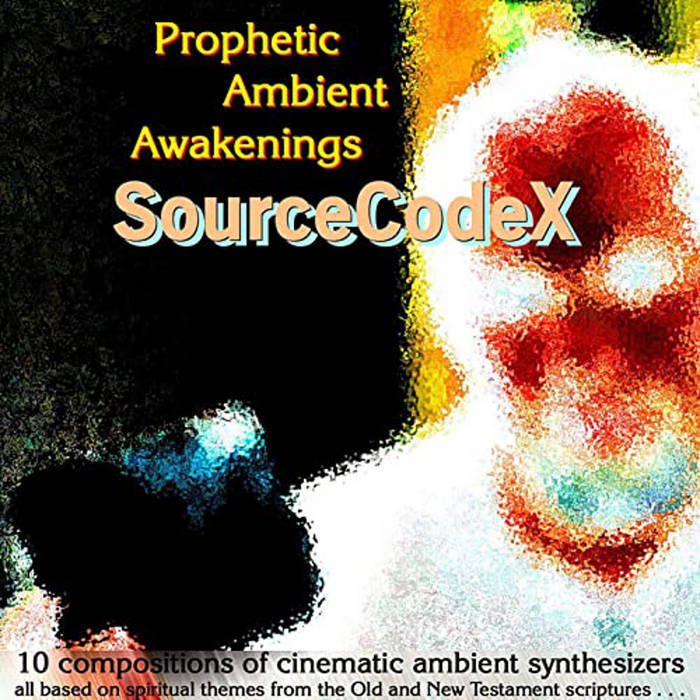 This is Cinematic Ambient Electronic Experimental visual-music or soundscapes

SourceCodeX's 5th release, Prophetic Ambient Awakenings, is a very personal release in that it attempts to communicate the artist's inner struggles with his intensely spiritual faith re-emerging after an extended darkness of soul. To share the power of ancient biblical themes and unseen truths via electronic ambient music was an immense challenge. The music is cinematic and intentionally emotive. There are many moments of aural peace mingled with intense passages of angst. Tension melts into resolution, terrestrial touches celestial, and temporal is swallowed by the eternal.

I have reviewed, listened to, and been influenced on many levels by hundreds of great electronic music recordings since the 70s ~ but the way I put my ambience together is very different from these myriad influences. My ambient music releases sound to me like few other ambient works I have had the pleasure to experience. I have strived to remain ultra-unique and true to my own ambient visions by creating and utilizing altered sound waves as misty-mirrored extensions of the soul's language.

A song-by-song commentary is offered now . . .

1. Path of the Overcomer -- This piece looks at my core belief system, that is unfortunately overlooked by mainline traditional Christianity, in that God has intended Mankind to cast aside self, to set aside independence, and to absolutely submit to the Creator God of this universe. It is not, nor never will be some religious system's job to "fix" anyone. Religion systems are Mankind's independence asserting godliness in spite of God's request that we have no idols. Our churches, our clergy, our religious tradition and its mantra have ALL become our idols. We submit to them instead of the Lord of the Universe. And we wonder why religion fails to really change the world . . . So, it is the "overcomer" that sees this and turns from religious systems of men to go out into the wilderness to find The Christ, just as Abraham left his father's idols to meet YHWH in the great unknown.

2. Dark Night of the Soul -- The title is pretty self-explanatory but for those who don't "get it" I will elaborate. Many Christian mystics, (those seeking the depths of God), will experience a dark horror of the soul, a night, a desert, a wilderness, a crisis wherein they seem to lose their way, heaven is silent and peace is gone. An overcomer will definitely pass through this forsaken time but on the other side is an inner strength after the test.

3. Works of the Flesh -- After many years of striving to be holy, an honest person will have to acknowledge as the scriptures teach -- we are not able to reach any place of self-made holiness nor will the God of all Holiness accept what we achieve outside of His offer of holiness through Christ. Anyone who approaches the Holy of Holies without the Spirit of God's grace transforming them, merely deceives themselves with nothing but "works of the flesh". It is aslo called self-righteousness, again fostered by religion itself.

4. Kadesh-Barnea Wanderings -- The ancient tribes of Israel were made to wander in this area of the wilderness, due to a spirit unbelief and rebellion against YHWH. They refused to cooperate with the Sovereign King of the Universe and did not overcome their fears and stubborn attitude. Only two faithful men of their generation and the young ones were allowed to enter the Promised Land.

5. Ramath Gilead -- Under Mosaic Law, cities of refuge were established where those citizens guilty of manslaughter could flee to and escape punishment. As long as they remained in the city walls under the care of the Levitical Priests and elders, they were safe. This was one of those cities, built in the mountains of Gilead. As a sidenote, one misty morning, as I stood watching the sunrise, many decades ago, I somehow "heard" a voice that spoke only these words, "Ramath Gilead" to me. I turned to look who spoke and I was alone. I have never figured out to this day why that happened to me!

6. Crusades, Jihad ~ All for Nothing -- Religious leaders and their Godless ideas have given us such savage madness as the Catholic Church's Crusades and the Islamic holy war or Jihad. These are prime examples of how the Adversary, Satan or Eblis use Mankind's religions to maim, kill, lie and destroy.

7. Derelict Doctrines of Darkness -- This piece was created from a 60 Hz hum or noise. I decided that it was a perfect way to demonstrate how noise can be altered, twisted, warped, mangled, re-worked into something very different from its true form. Such is much of religious dogma. It is noise that masks the truth of God and thus leads one into a confusing darkness of lies.

8. Great Faith of the Bride -- God has sought throughout history for a Bride from Mankind itself to be intimately joined in spirit with Christ. This Bride is not the ekklesia or Christ's Church as traditional mainline Christainity teaches. The Bride is composed of the overcomers, those who refuse the bogus ideas of churchianity and religiosity. In the book of the Revelation we find the overcomers and the Bride who has made herself ready for Christ. This is a great mystery to most.

9. Ancient Battle of Wills Ended -- This is a cinematic, ambient painting of a great cosmic battle that has raged long before Mankind was even born, but via the Son of Man, the Christ and His true warriors of faith, the battle finally ends.

10. Kingdom of God -- Final peace, conflict resolved, many a revelation and surprise awaits Mankind that religion never even considered . . . eternity unfolds . . . time is no longer needed . . . Glory to God!

author: Phil Derby
More dark minimal ambient from John W. Patterson, whose Primordial Lands Arise I compared to Stalker by Robert Rich and Lustmord. This time around, it is marginally lighter on occasion, such as on the opening track “Path of the Overcomer,” as shimmering tones softly weave their way into the darker drones. Still, with track titles like “Dark Night of the Soul,” this is hardly lighthearted new age. Patterson offers extended track-by-track notes on CD Baby’s site regarding his spiritual journey that culminated in this release. Melody and rhythm are virtually absent throughout. Occasionally a sound will coalesce into something almost solid, but for the most part sounds lay deep in the background, as if hiding in the shadows. Sometimes the edges are softer, sometimes rawer; often it is organic, but at times it slips into a more industrial-type sound. For those willing to take the journey it doesn’t get much better than losing yourself in the depths of something like “Works of the Flesh,” a brooding almost sinister piece. “Kadesh-Barnea Wanderings” has a more restless quality to it, like distant thunder. “Ramath Gilead” goes back to brighter shimmering timbres, although it takes some haunting twists and turns along the way. If you like pure drone music like Stephen Phillips’ starker recordings or Stephen Parsick’s “doombient” releases, Prophetic Ambient Awakenings should be right up your dark alley. © 2009 Phil Derby / Electroambient Space

author: Past Customer comments
Well between you and me, I listened to some other ambience-related music, including Steve Roach [et al] and they got nothing on you. Your sounds are by far more satisfying and suit me fine. I like your work and do want to purchase more if you can stay somewhat true to your sound, like the albums I already have.

Original cover photo, manipulated image of myself was taken & altered by journalist David Leone while interviewing me about my ambient music.